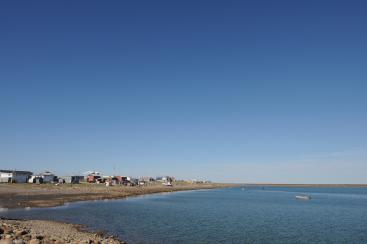 Welcome to NUNAVUT WATER BOARD

The Nunavut Water Board has responsibilities and powers over the regulation, use and management of water in the Nunavut Settlement Area.

The NWB seeks to protect, manage and regulate freshwaters in Nunavut by incorporating Inuit Qaujimajatuqangit and scientific knowledge in decision-making. The NWB is based in Gjoa Haven, Nunavut.

In discharging its primary function of licensing uses of water and deposits of waste, where appropriate, the Board considers any detrimental potential effects to the environment.  The Board is an Institution of Public Government and thus, it solicits and welcomes the active participation of multiple stakeholders, including members of public, during its process.  This is often achieved by way of Public Hearings in the community or communities most affected by a particular project.

The Board has responsibilities and powers over the use, management and regulation of inland water in Nunavut and its objects are to provide for the conservation and utilization of waters in Nunavut —except in national parks— in a manner that will provide the optimum benefits for the residents of Nunavut in particular and Canadians in general.

The NWB operates at arm's length from government and other parties and is part of a larger management regime constituted of other Institutions of Public Government, including the Nunavut Surface Rights Tribunal, the Nunavut Impact Review Board and the Nunavut Planning Commission, as well as other land and resource management bodies like the Nunavut Wildlife Management Board, Regional Wildlife organizations and local hunter and trapper organizations in particular.